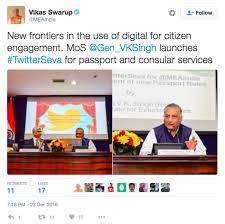 Ministry of Communications has launched ‘Twitter Seva’ to provide real-time public service and effective communications to citizens across the country Indian citizens and businesses can Tweet to @manojsinghabjp using #DOTSeva, #BSNLSeva, #MTNLSeva, and #PostalSeva to communicate with 4 departments under the Ministry
1st August 2016: In its latest step to provide transparent and timely government service to citizens across the country, Minister of State for Communications, Manoj Sinha (@manojsinhabjp) today launched ‘Twitter Seva’, Twitter India’s customised e-governance delivery service to realise the vision of minimum government and maximum governance.

Twitter Seva in its first phase has been launched for the Minister of State for Communications (@manojsinhabjp), Department of Telecommunications (@Dot_India), Bharat Sanchar Nigam Ltd (@BSNLCorporate), Mahanagar Telephone Nigam Ltd (@MTNLOfficial), and Department of Post (@PostOfficeIndia). Through Twitter Seva, the Ministry envisions to take their public service engagement to the next level, by scaling real time service citizen interaction.

The various departments will use dedicated public service hashtags in the Twitter Seva system. Indian citizens and businesses can Tweet to the Minister of Communications (@manojsinhabjp) using #DOTSeva, #BSNLSeva, #MTNLSeva and #PostalSeva to reach the respective departments for their government service queries, real-time updates and requests for assistance.

Speaking at the launch, Manoj Sinha said, “As per the vision of Honourable Prime Minister Sh. Narendra Modi, we would like to utilize the services of social media to serve the people of India. Social media is an effective tool of communications between the Government and people. We will continue to put our efforts to ensure the delivery of quality service. From Government “Twitter Seva” is a special step in this direction.”

“I hope that all Telecom operators from Government as well as private shall use the utility of Twitter Seva to the fullest,” he further added.

With the help of the Twitter Seva dashboard, the ministry will monitor citizen queries and customer service requests from Telecom vendors, cellular operators, postal service providers and Indians across the country to take quick action in a time bound, accountable manner. Twitter Seva helps process large volume of Tweets, converts them into resolvable tickets and assigns them to the relevant authority for real-time resolution. The service is driving efficient and effective customer service as well as collation of real-time citizen feedback.

Raheel Khursheed, Head of News, Government and Politics Partnerships, Twitter India, said, “Ministries using Twitter Seva have changed how the Indian Government interacts with citizens in a live, accountable manner on a nationwide scale and has redefined the customer service culture in their respective public sectors. Twitter is delighted to support the Ministry of Communications in providing e-governance delivery in real-time, with a citizen first strategy. The Twitter Seva system is now tracking several thousand official government accounts on Twitter and more than 400,000 Tweets per month, with each Tweet stacking up as a metric of the Government’s intent to deliver effective and transparent service.”

The Ministry of Communications joins a growing group of ministries like the Commerce Ministry (@DIPPGOI), the Ministry of External Affairs (@MEAIndia) and the Ministry of Railways (@RailMinIndia) using the Tweet-powered service platform, in addition to government agencies such as the Bengaluru Police (@BlrCityPolice). 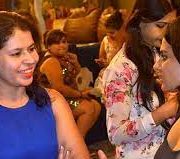